Find art, music and magic through the inspired work of artists and creatives that call Akaroa and The Bay’s home.

Visit the Museum at the heart of historic Okains Bay, just over the hill from Akaroa.

Enjoy the relaxed environment and open spaces as you learn about life on Banks Peninsula in former times. Significant taonga Māori and early Pākehā items are among the exciting range of treasures on display in the museum’s diverse complex of heritage buildings.

Akaroa Craft Market is on the grounds of the Presbyterian Trinity Church (1886). It is held on weekends and on cruise ship days over the summer months.

The Akaroa Community Arts Council is a dynamic group of Peninsula volunteers who promote and encourage creativity in the communities of Akaroa and the Bays.

We aim to enable and provide subsidised opportunities for participation in arts activities across a wide range of disciplines. We do this through workshops, classes, creative events and local art exhibitions. 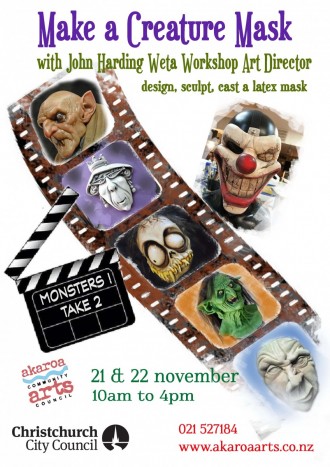 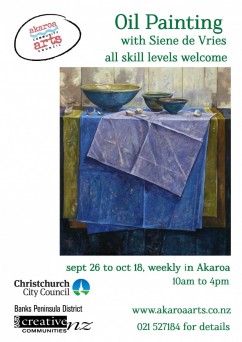 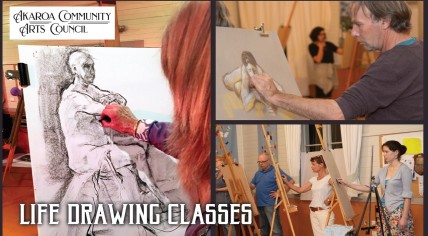 We would love you to join us!

The Akaroa Art Gallery comes to life in the warmer months when Akaroa is full of visitors and holiday-makers. The gallery hosts exhibitions featuring the work of artists from Banks Peninsula and beyond, many of whom enjoy national and international recognition. It also provides a wonderful venue for intimate musical events and varied workshops throughout the year.

The historic building where the gallery is located is officially known as The Orion Powerhouse Gallery.  The building began life in 1911, housing Akaroa’s hydro-electric power equipment. Several years later it was extended to house a gas engine and workshop both of which remained in use until the mid-1950s when the equipment was sold to the Maruia Springs Hotel.

In 1970, then local resident,  Patricia Bosshard, established a gallery and concert venue in the empty building.  She organised concerts and a film society.  In 1977 an incorporated society took over the running of the Powerhouse as a gallery and concert venue.  Financial support for the project was provided by Orion the local power company.
Today, the Akaroa Art Gallery is an iconic and much-loved Akaroa institution with a membership of 150 people from all over Canterbury.

In about 2000 the hydro-electric plant at Maruia Springs became redundant.  With help from local volunteers and support from the Akaroa Civic Trust the equipment was then returned to the Orion Powerhouse Gallery where it remains to this day.

For the current event on at the Akaroa Art Gallery visit our website.

A Peninsula landmark. Enjoy delicious food and coffee in a peaceful sculpture garden. Fantastic giftshop with quality, unique and original New Zealand art. We have regular exhibitions in our Gallery exhibiting contemporary NZ sculpture, painting and jewellery. Check out our web site for our present and up and coming exhibitions. Live viewing of our art on our web site.

Open Hours
Everyday except Christmas day
9am - 5pm weekdays
9am - 5.30pm weekends
We are open every day.